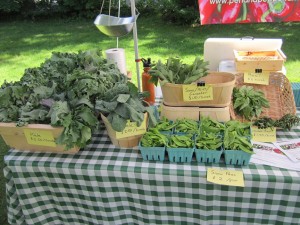 Our farm stand on June 28 at the JP Market

Last Thursday, we were back at the JP farmer’s market.  Or rather, I should say, I was at the market, because the kids were off doing their own things.  Luckily, I was able to get everything set up on my own, because the kids will either be working or at camp for all of July.

This week we had kale, chard, snow peas, lettuce, basil, and a little bit of sage, mint, lavender, and cilantro.  It wasn’t nearly as hot this week–the weather was perfect, actually–and we had a lot more traffic than we did the first week (and took in almost twice as much in sales).  We’re still struggling to keep the greens crisp over the duration of the market.  I’m going to try picking greens the morning of the market, which means getting up super early on Thursday, rather than picking the night before and keeping them in the coolers.

Greens remained a tough sell overall.  Snow peas were popular, as was basil and all the herbs.  A clear lesson from the market has been the importance of having something a little different from the other stands. I could have sold lots more basil and herbs.  People are already looking for peppers, but we’re at least a few weeks away from peppers.

We already had our first repeat customers.  Our very first farm stand customer, Cait, returned, as did our friend Bonnie with her kids in tow.

And we loaned our first library book!  Peggy was the very first patron of our tiny little lending library.  I hope we’ll have many more. 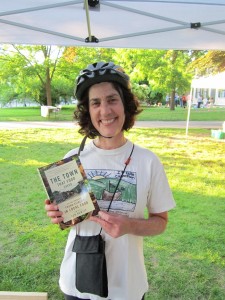 Speaking of libraries, there’s also a new table at the market.  The Friends of the JP Library will have a regular mini book sale at the market to raise funds for the Jamaica Plain branch library.  I was thrilled that we’ll have another table there drawing readers to the market (who might be interested in some of our books, too) (and maybe some of our veggies). 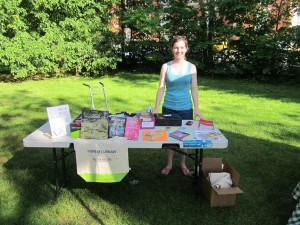 Elizabeth staffed the table for the Friends of the JP Library

We’ll be back at the market again this week, on July 5.  I’m curious to see if traffic dips severely with so many people away for the 4th of July week.

This entry was posted in Farm Marketing, Farmer's Market. Bookmark the permalink.