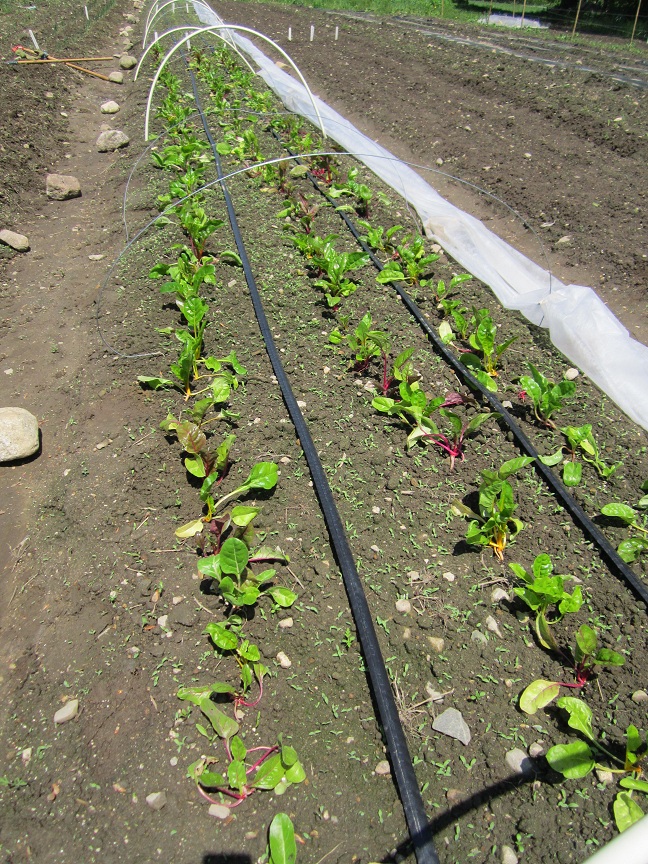 These chard seedlings that we bought all survived, but the kale was destroyed by a storm and rabbits.

I’m a planner by nature.  I love to make lists. I make pages of goals at the start of every year, for just about every task.  All of this makes me a natural match for farming, because if there’s one field where you can spend hours and hours, creating spreadsheet after spreadsheet planning, it’s farming.

As part of the New Entry Sustainable Farming Project, we were required to take a farm business plan writing class before we were even allowed to apply for land on the incubator plots.  It’s a smart requirement.  This way, when before I ordered my first seed packet, I already had a detailed step by step outline of what I planned to raise, how I’d market it, and where I’d sell it.

According to my plan, we would be in two different farmer’s markets–one in Jamaica Plain and another (every other week) in Acton-Boxborough, and to the World PEAS cooperative CSA.  I thought I’d sell a tiny bit to neighbors, too.

So I planned for gross sales to work out like this:

This would be against planned expenses of $6,280 (which included gas).  So theoretically, we could make about $2,300.

Not bad.  Except that all my sales projections were based on the tiniest bits of data and lots of wishful thinking.  It was very hard to know how much we were likely to make at the farmer’s markets–I’d heard wildly different stories, but found little actual real numbers.  And the truth is that prices and traffic volume varies wildly from market to market.  I could find some number for crop yields, but I knew I was a beginner with lots of gardening experience, but very little farming experience.  (And I learned fast that they are NOT the same.)

In terms of special ideas for the farmer’s markets, we planned to put out recipes, have a lending library, and offer special pre-packaged “salsa packs” for our customers.  It was hard to see if any of these would work.  But they sounded good.

The entire season was filled with making adjustments to the plan.  The big ones came early.  I found out that my World PEAS bid was capped, because I was a first year farmer (smart move on their part).  So now I could only plan on selling them $2,635.  And then we found out that we did not get into the Acton-Boxborough Farmer’s Market.  That cut more than $1,600 from our projected income.

Early drought followed by a rough spring storm and rabbit problems wreaked havoc with the snow peas and early kale.  We had planned to deliver 80 pints of snow peas to World PEAS–amount actually delivered: 0.  Our beets ran into problems all season long, with only one succession really thriving.  The initial planting of kale was too small to keep up with our expected deliveries.  Onions were attacked by root maggots and never sized up.

But there were unexpected surprises, too.  We grew and sold more basil and zucchini than expected.  We had tons of late kale and kept selling the extra to World PEAS, gradually making up for the missing beets and snow peas.

At the market, the recipes were a big success, the library was of small interest, and it turned out that “salsa packs” didn’t really make much sense.  And we were lucky to be shut out of the Acton-Boxborough market, because we really didn’t have the time nor the produce to sell.

More and more, we learned how much farming is about adjusting plans based on existing conditions and new data.  In the long term, in farming like any business, good planning is an iterative process.  The initial plan is necessarily flimsy.  Next year, we’ll do better, but still miss a lot.  In ten years, we’ll have a much better grip on what we’re doing.

At the end of the year, we didn’t miss our income targets by as much as I would have expected in early June when we were having crop failures right and left.  Here are the actual numbers:

So we came up about $1,000 (11%) short of our best-case, somewhat uninformed projections.  Which, to me, feels pretty good considering the unexpected loss of one market and cap on another.

My goal this year was to learn a lot, have fun, and not lose too much money.  I think we made it.

I’m especially interested to see which crops met or exceeded our plans, and which ones failed miserably.  So I’ve put together the table below to figure out which were our winners and losers:

Man, do I love spreadsheets.  (seriously)  This shows so clearly how our plans were forced to change over the season.  There are a whole bunch of tiny sales that were items plucked from our garden (rosemary and dill) or seeds/seedlings planted to fill late season empty spaces in the field (cabbage).  You can see we were all over the place in terms of whether we met projections or not.  Of 21 projected crops, 13 (60%) sold less than we expected.  Of those, we missed our projected sales by 50% or more!  But on the plus side, we surpassed sales by more than 50% in 4 crops (basil, beans, kale, zucchini).  With all the ups and downs, we still only missed our sales targets by 6%.

When you look at quantities, this chart also shows other areas where our plans didn’t turn out as expected.  Not only were quantities different, but by looking at the difference between sales and yield differences, you can see that we were surprised by some prices, too.  For example, we sold about 17% more pints of beans than we expected, but earned 149% more than expected.  Prices were  higher than expected for beans, garlic, and potatoes.  Prices were lower than expected for cucumbers, lettuce, hot peppers, and tomatoes.

(Just in case you’re wondering whether our sales fall into a classic 80/20 scenario, where 80% of sales comes from just the top 20% of products–the top 6 crops accounted for 62% of sales in our case.)

Anyway, you get the point.  Beginners have a hard time planning, because they have poor data.  We’ll do MUCH better next year (my head is still spinning from this spreadsheet), but we’ll still never nail it, because of weather and pests and changing markets.  We’ll have to ready to keep adjusting all season long, every season.

That’s part of what makes it fun. 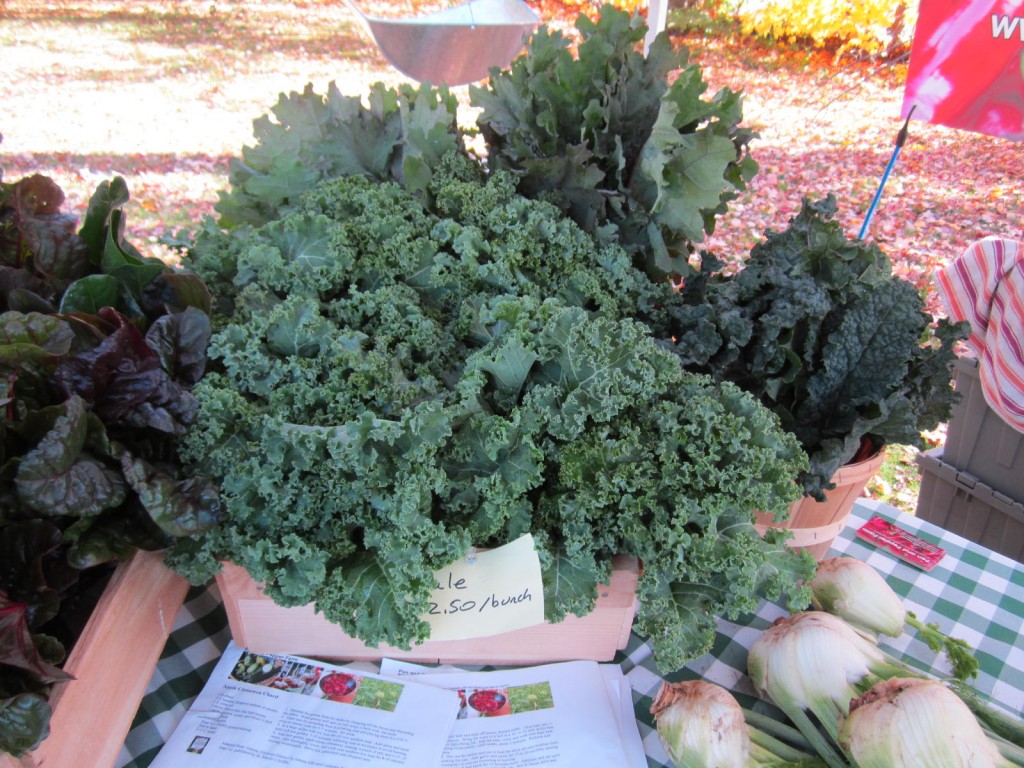 Kale was one of our biggest crops this year. We sold more than 600 bunches.

This entry was posted in Lessons of a First Year Farmer. Bookmark the permalink.