Yesterday, we made our first delivery to the World PEAS Cooperative CSA.  More than 25 farmers supply produce to this venture, which then sells shares to customers.  We’re contracted to grow six different crops for them: kale, chard, snow peas, heirloom tomatoes, tomatillos, and hot peppers.  Every week, we’re supposed to box up a certain amount and deliver it the CSA cooler and warehouse, where it is then packaged the next day and delivered to customers.

Our first delivery was supposed to be for 20 bunches of kale (each 12-16 ounces, which is a lot of kale), but the rabbits and early bad weather destroyed our early kale, leaving us with only enough for 10 bunches.  Soon, we should be able to start delivering 20 bunches reliably every other week. 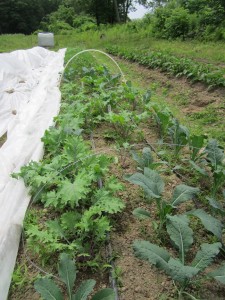 Kale ready to be picked.

It took a while to pick it all.  Of course, I didn’t make it easy for myself when I first planted–we have three (really four) different kinds of kale, so that meant several passes through the row.  It turns out that three big buckets of kale (Ripbor and Red Russian) was enough to make 5 bunches.  Right now, this early in the season, the stems are very short, which makes them hard to bundle.  They’re also super tender.  Later in the season, you might not want to eat kale raw, but right now this stuff is a real treat.

After I got the first batch picked, I took it just a few feet over to the wash station, and put the kale through two washes before bunching. 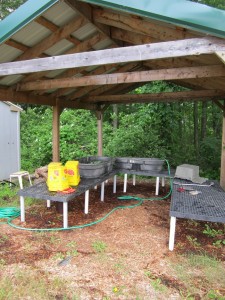 The wash station is where I'll spend a lot time this summer. 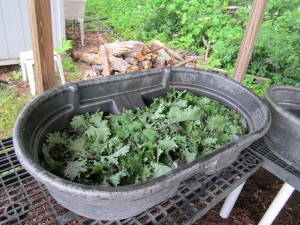 kale in the wash tub

Doing any new task takes a lot of concentration, as well as time.  I was pretty slow this first time, but I was also doing plant assessment, pruning, and a little weeding along the way.  With practice, I hope to get a lot faster.  (Getting ready for the Thursday farmer’s markets is going to be tricky.) 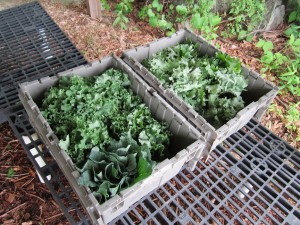 Once I had it all bunched, I put the kale in these handy plastic boxes for delivery to the World PEAS cooler in Lowell.  (Important lesson:  harvest early, the traffic in Lowell is a bear in the late afternoon.  Yikes.)  I’m glad I had the GPS to get me there, because it’s tucked away in a little industrial section of Lowell that doesn’t at all look like somewhere you’d deliver vegetables.

But I found the right place, dropped off the full boxes, got empty ones, and was on my way.  (Next time I’ll take photos of the inside of the cooler.  It’s a simple but effective setup.)

It doesn’t look like much on the outside, but it does the trick.

Making the delivery made me feel a little bit more like a real farmer.  (I’ll get paid in a few weeks, and then I’ll feel even more like a farmer.)  Soon the deliveries will get larger and I’ll get faster and more efficient at making them.

This entry was posted in harvesting, Uncategorized. Bookmark the permalink.