We’ve been working hard in the fields over the past week, trying to get caught up.  The heat and rain helped our plants grow, but they also gave a huge boost to the weeds.  Combine that with a busy week of theatre stuff for me (TCG had their national conference in Boston June 20-23, I had a play in Mill 6’s T Plays Festival, and I had a reading of a new play from Fresh Ink Theatre on Tuesday, the 26th), and we ended up falling a bit behind.  And the cabbage white butterfly caterpillars stared devouring our kale at an alarming rate.

But the good news is that there are solutions.  Weeds can be pulled.  Plus I sprayed Bacillus Thuringiensis (Bt) to see if we can stop the caterpillars.  This is an organic (OMRI listed) remedy, a naturally occurring bacterium that is supposed to do a fine job killing caterpillars (and nothing else).  I’ve never been one to spray anything on my gardens, but I’m seeing quickly how growing at the farm level is very different. I can’t afford to lose my entire kale crop, and this seems like the least poisonous way to control the infestation.  Part of the benefit of being in the New Entry training program is learning how to use organic pest controls in a safe and thoughtful manner.

We’re seeing a lot of Colorado Potato Beetles on the potatoes right now, but so far hand picking has done the trick. (We only have about 70 plants.)  I hope that keeps up.  We have had to use some iron phosphate to keep the slugs down, especially in the very damp weather we had a few weeks ago, when they were tearing up the chard and lettuce.  By keeping up with the weeding and keeping the field borders mowed, we’ll probably have fewer slug problems.  We’ve also taken off the row covers from all the crops, which will further reduce slugs, but will expose them to more damage from beetles.  Farming is a constant game of trade offs.

We’ve continued with our deliveries to the World PEAS CSA.  Here’s the inside of the cooler where we drop stuff off: 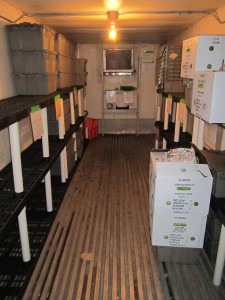 Every week, we pack our produce in grey plastic boxes, like the ones on the upper left for our delivery.  They’ve got a system for keeping track of who has delivered which vegetables that seems to be working smoothly so far.  We got our first check on Friday–$63!

I’m greatly relieved that World PEAS is used to dealing with beginning farmers. We’ve had a hard time making the originally bid amounts for just about everything.  We were supposed to have 80 pints of snow peas for them, but weather, rabbits, and just not enough peas planted, left us far short.  Everything has taken longer to grow than expected.  We lost half our crop of beets to disease and will not come anywhere close to having 85 bunches of beets ready next week. This has been tough, because I place great value on following through on my commitments.  But farming is a constant stream of lessons, in patience, in learning to acknowledge mistakes, in accepting forces behind my control.

For now, we just keep on planting, weeding, and harvesting, trying to do the best we can.  And try to pay attention to the mistakes we’ve made, so that next time, the mistakes we make will be different ones.