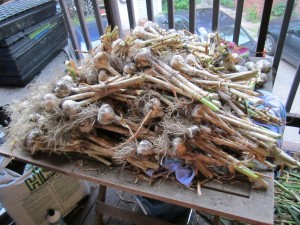 More than 250 heads of garlic!

On Sunday, Tracy and the kids came with me up to the farm, for a lot more weeding and working.  I’ve got a two-week workshop of my new play, Flight, with the Huntington Theatre Company that started today, so it was important that we get the field in as good a shape as possible before I get too wrapped up in rehearsal and rewrites.

In addition to weeding paths, we also tilled in the spent row of snowpeas.  Sadly, the BCS tiller broke (temporarily) before I could switch the attachment to put the new raised bed together for the beets, so I had to rake it together by hand.  A lot of work for a hot day.

I also sprayed copper sulfate, in an organic formulation, on the potatoes, tomatoes, and tomatillos.  Copper acts as an anti-fungal agent, and Late Blight has appeared in several Massachusetts towns and counties.  Late Blight spreads fast (it’s wind-borne) and can devastate an entire crop, quickly.  (The plants must be destroyed.)  This is the kind of thing that makes farmers very nervous.  (It certainly has me nervous.)  We’ll probably be spraying weekly until the danger has passed and just keep our fingers crossed that it will work.

Summer veggies are growing well now.  Zucchini and cubanelle peppers will be ready for market this Thursday.  I harvested beets for the World PEAS CSA delivery yesterday, though our early beet crop did very poorly.  We were originally supposed to deliver 85 bunches of beets, but only had enough for 20.  I hope we’ll do better later in the season.  The beets were still small, though the Bull’s Blood greens (they should call them reds) were gorgeous. 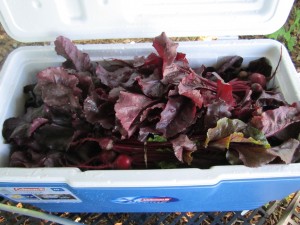 Lots of beets in the cooler.

Most exciting was the garlic harvest (see the top of this post for photo).  We harvested about 250 heads of garlic.  They’re now bundled together on our back porch, out of the sun, to cure for 1-2 weeks.  After they’re cured, they’ll store much better.  We’ve got some really big heads.  I can’t wait to get it to the market!