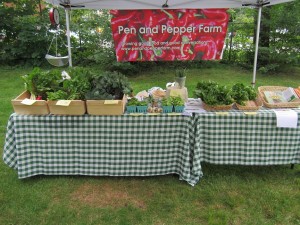 Our market table on July 5

Our third market, last Thursday, went very well.  Jamaica Plain has a “First Thursdays” event, where there are various open studios and vendors around, so we had lots of traffic.  We almost sold out!  All I had left at the end of the day was one bunch of chard (and two little bunches of sage, but I’m not counting those).   It felt great to sell almost all of our produce, though as our offerings shrunk, it got harder and harder to sell.  No one comes over to at able with just one bunch of chard. 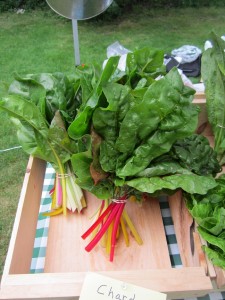 In addition to having more customers, our produce also looked a lot better this week.  That’s because I got up at 5 a.m. and picked all the greens that morning and put them on ice in the coolers to have them be super fresh for the market.

We also had our first garlic this week.  I picked three giant heads of it, seeing if it was all ready to harvest.  (It pretty much was.)  We were able to get $2/head for this super fresh stuff. 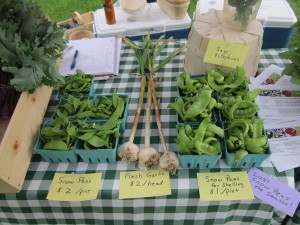 first garlic of the season!

We also finished with the last of the snow peas.  But we’ve got summer veggies starting up this week, with cubanelle peppers and zucchini on the way.

For First Thursday, we had a new neighbor at the market.  Ally from Whoopie Monster was there, selling whooppie pies made with all natural ingredients at a local incubator commercial kitchen.  (I had one and they’re very yummy.)

This entry was posted in Farmer's Market. Bookmark the permalink.